Reading the Christmas story in the Bible, this year especially Mary, the mother of Jesus, moved me and I thought about her person and her role in God’s great plan.

What do we read about Mary in the Bible?

Maria was an ordinary young girl from Nazareth. She was a housewife and was engaged to the carpenter Josef. She had grown up in poor conditions. She had dreams and plans like many other girls of that age. One day the angel of the Lord appeared to her with a greeting and told her that she would get pregnant and give birth to a son to whom she should give the name Jesus. This Jesus will be great and will be called the Son of the Most High and his kingdom will never perish. We can imagine how scared Maria must have been. She was probably very scared. The angel said to her:

Since Mary was still a virgin, she asked the angel how all this could happen. The angel answered

“The Holy Spirit will come on you and the power of the Most High will overshadow you. Therefore the child you will give birth to will be holy and will be called the Son of God ”Luke 1,35

He told her about Elisabeth, who was pregnant in her old age and was now in the 6th month.

“Because with God nothing is impossible” Luke 1.37

When reading the story, I am particularly moved by Maria’s answer. She answered:

“I am the servant of the Lord and I bow to His will. May everything you said come true and happen to me. ”Luke 1:38

Mary was chosen by God, although she had nothing special to show, in the eyes of society at that time she certainly seemed unsuitable for carrying out an important task for God. She was young, poor and a woman.

What are the characteristics of Mary that have led God to implement His plan through her?

Mary was a believer, knew and lived the Old Testament scriptures, and knew about the prophets’ predictions about the birth of Jesus.

“Therefore the LORD himself will give you a sign: Behold, a virgin is pregnant and will give birth to a son, whom she will call Immanuel. “Isaiah 7.14

When Jesus was born in the Bethlehem stable and the shepherds came to Mary and Joseph and told that they had received the message from the angel that this child was the promised Savior and Messiah, there was no doubt in Mary’s mind.

“But Maria kept all these things in her heart and often thought about them” Luke 2:19

Maria realized that God would do great things through her life, yet she was not proud or arrogant. Maria knew that this story was not about her, but something much bigger. She did not consider herself special, she had no special honorary position, she was aware that she too was a person who needed a Redeemer. Mary herself gives all honor, adoration, admiration, praise, worship to her God. This is expressed in her song of praise to God:

“My soul praises the greatness of the Lord / and my spirit rejoices over God my Savior. / Because he looked at the lowness of his maid. / Behold, from now on all genders blessedly praise me. / Because the mighty has done great things to me and his name is sacred. / He has compassion from gender to gender for all who fear him. / He performs powerful deeds with his arm: / He scatters who are arrogant in the heart; / he overthrows the mighty and heightens the low. / He gives gifts to the hungry and leaves the rich empty-handed. / He takes care of his servant Israel and thinks of his mercy / / which he has promised to our fathers, Abraham and his descendants forever. “Luke 1, 46-55

I can learn from Mary that God wants to use each of us and has a special task for everyone. Maria was a person like us, she heard God’s speech and acted accordingly. Your willingness was important to make God’s calling come true for your life. Besides her, God has called many ordinary people to make extraordinary things come true. Maria was important, but everyone is important to God.

“While he was still speaking, a woman in the crowd shouted:” Happy is your mother who gave birth to you and nourished your breasts! “But he replied:” Yes, but happy are all who hear an do the word of god “

What we can still learn from Mary is prayer. In the story of the wedding at Canaa. When the wine ran out, Mary turned to Jesus because she knew that he could help.

“Jesus replied to her: Woman, this is MY thing, not yours. MY hour has not yet come ”John 2: 4

Mary herself could not do miracles, it was God’s business, but Mary expected the miracle from Jesus:

“She speaks to the servants: What He tells you does” John 2: 5

For me, Mary is a role model in her faith, her humility, her devotion, her loyalty, her sacrifice, in her trust, in her obedience, in her love, in her willingness, in her humility, in her fear of God and in her yes to God. No more and no less. It shows me that God alone deserves all worship and honor for what he can do in us humans. That is why I do not worship her and for me she is not an intermediary or advocate with God. My mediator and advocate with the Father is only Jesus.

“Because there is a God and an intermediary between God and man, namely the man Christ Jesus” 1 Timothy 2: 5

We can ask ourselves today:

God wants to use you and me to make His glory visible in the world.

Finally, a text by Peter Reid:

Every time I say, “Jesus, I can’t do that,” Jesus says, “I know, but I can.” Every time I say, “Jesus, I am not capable”, he says: “So what? I am capable. “And every time you say:” Jesus, it is not me “, then Jesus says:” Don’t worry! I am “. It doesn’t depend on you. It all comes down to Jesus! And the next time you think you have an excuse for why God can’t use you, think of the following people I’m listing now: Noah got drunk. Abraham was too old. Isaac was a day dreamer. Jakob was a liar. Lea was ugly. Josef was mistreated. Moses was a murderer – like David and Paul. Deborah was a female judge. Gideon was scared. Samson even had long hair. Rahab was a prostitute. David was too young – by the way, like Jeremiah and Timothy. David pretended to be insane – had an affair and ran away from his son; Elia was a suicide candidate. Jeremiah was depressed. Isaiah preached naked. Jonah ran away from God and Naomi was a widow. Job lost everything. John the Baptist ate grasshoppers. Peter was angry. Johannes was self righteous. The disciples slept while praying. Matthew was a thief. Simeon was fanatical. Martha took care of everything. Maria was lazy; Maria Magdalena was demon-obsessed. The boy with the fish and bread was unknown – until today. The Samaritan slept with several men. Zacchaeus was too small. Paul was alone. Markus gave up. Timothy had an ulcer and Lazarus was dead. What is your excuse? Please give me one more reason why God can’t use you? God wants and can use you! Certainly not because you are so great. But because he gave you a new life: And that is Christ in you. And from his strength you can learn to live. 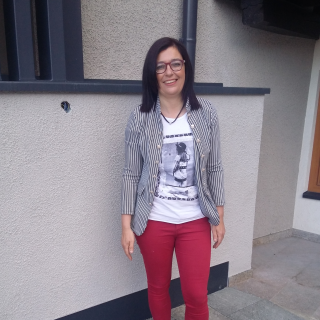